"Worked out to an inch of his core. More!"


Difference between glosses from 2000-2010 and current, premium 2019 edition, comes to light in the most devious of ways.

New's code is "Responsif you plais", meaning that site makes use of flexible layouts, flexible images and cascading style sheet media queries. Essentially, responsive design of finwake automatically scales its content and elements to match the screen size on which it is viewed. Moreover, in 2019 premium edition, line spacing is defined as 1.3 of standard line height for better readability (lines that you are reading just now are fixed at 2.0 line height). Font of the footnotes is determined as Geneva, -apple-system, system-ui, BlinkMacSystemFont, "Segoe UI", Roboto, i.e. fonts that best suit device on which footer is loaded. "San Francisco" is Apple System Font, "Roboto" is Andorid's, "Segoe UI" best suits Microsoft devices, etc., and font of this text is adjusted for your reading device. Incidentally, background of this text has the same color as blank paper of Finnegans Wake paper edition from 1975 - strangely pink un', and that background is implemented in justified version of FW text Chapter 1,  through a "constant labor to make a ghimel pass through the eye of an iota" exemplified in trials to text-align: justify; which is proven nightmare and receipt for disaster for every webmaster.

It goes without saying that although premium edition looks like ideal solution for mobile devices, old school desktop devices are in no way earwigged. In fact, even more enhancements can be found on desktop and laptop monitors then on tablets & mobile phones - for instance, /* Scrollbar custom width */ improves visual effect of an scrollbar on desktop and laptop monitors but is invisible on most mobile devices: 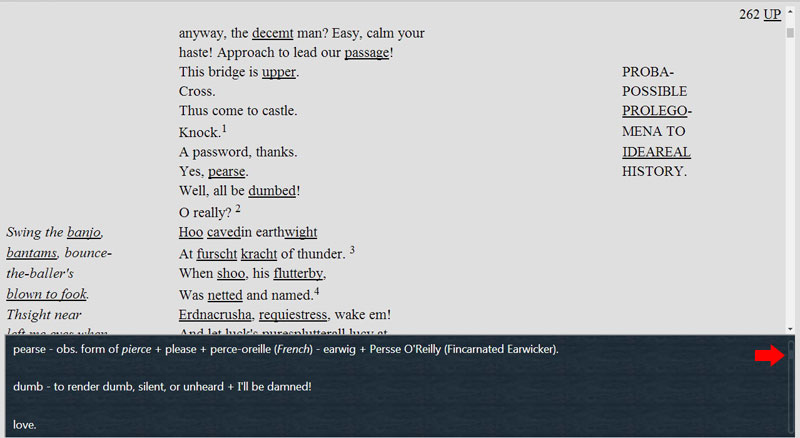 Gropesearching eyes will locate at least 20-30 more fine tunings in finwake, from font size till sigla shape. Justified version of Finnegans wake text together with genuine pagination, Holy Grail of responsive publishing (when a pixel is not a pixel?), completed in January 2019, resulted somewhere in line with this: 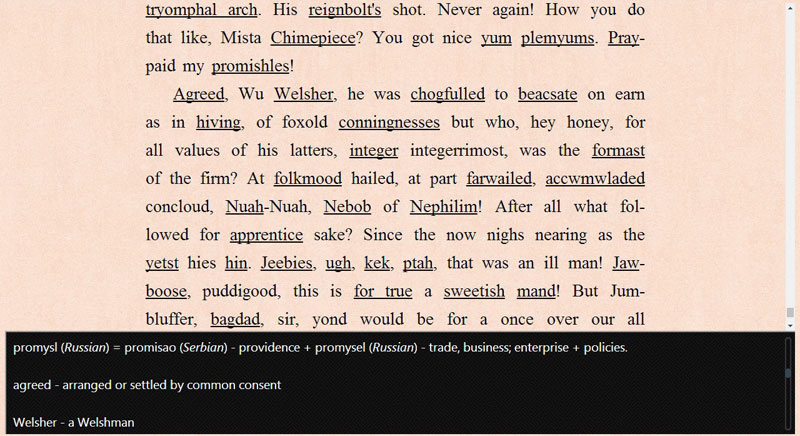 In October of 2018 new navigation button was also added (instead of vintage "UP"): 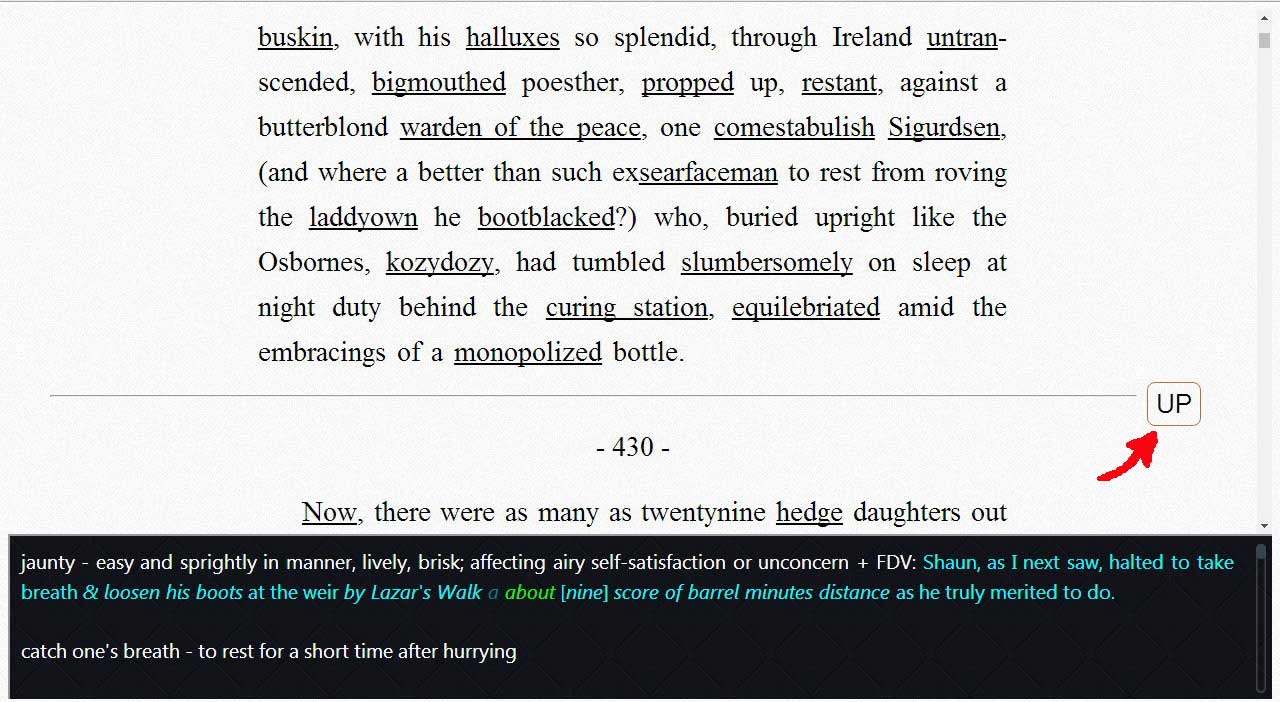 As of December, 2018, all handcrafted justified chapters were added in premium section. Every chapter has different background(s) until perfect one is found in unquenchable quest for ideal reading experience.

Obsession with design, obsession with quality goads towards further improvements in navigation and annotations. On the next picture spaces inbetween navigation buttons are evident - that helps the thumb to hit the right page on smaller devices. Also, thumbnail reveries (little pictures) are being added in footnotes.

And as of now, premium section is getting crowded with Joyce's notes, excerpts from letters, different draft versions, proofs, galleys, etc. - i.e. with harvey loads of new glosses. And why glosses? Talcott Parsons used the term "gloss" to describe how the mind constructs reality, "filtering" the data coming from our senses. This "filtering" is largely unconscious, and is affected by factors such as cultural constructs including language, personal experience, belief systems, and so forth. Different cultures create different glosses, all called reality by the members of those societies. A gloss is a total system of perception and language - in case of FW general idea of lumping words together in a "glossy" outfit is to make a totality. And more in that line, Joyce's gloss for premium content on this site would be: "You got nice yum plemyums. Praypaid my promishles!" On the other side of the coin is Issy's footnote, FW.304: "Wipe your glosses with what you know."